Disclocure :Sleepwithcomfort is reader-supported. When you buy through links on our site, we may earn an affiliate commission.

People often find themselves in confusion while choosing one mattress over another.  Are you the one who is struggling to decide between Bear Mattress VS Dreamcloud?

No worries! Hang around on this page for a couple of minutes and we are sure you will find the mattress of your dreams.

Side By Side Comparison Between Bear Mattress VS Dreamcloud:

Both Bear and Dreamcloud mattresses are available online. Their substantial differences in the feel, cost, and structure make them easy to distinguish from one another. In this comparison between the Bear mattress VS Dreamcloud, we’ll go into more detail about how they compare.

You may like to read this; Bear vs Casper 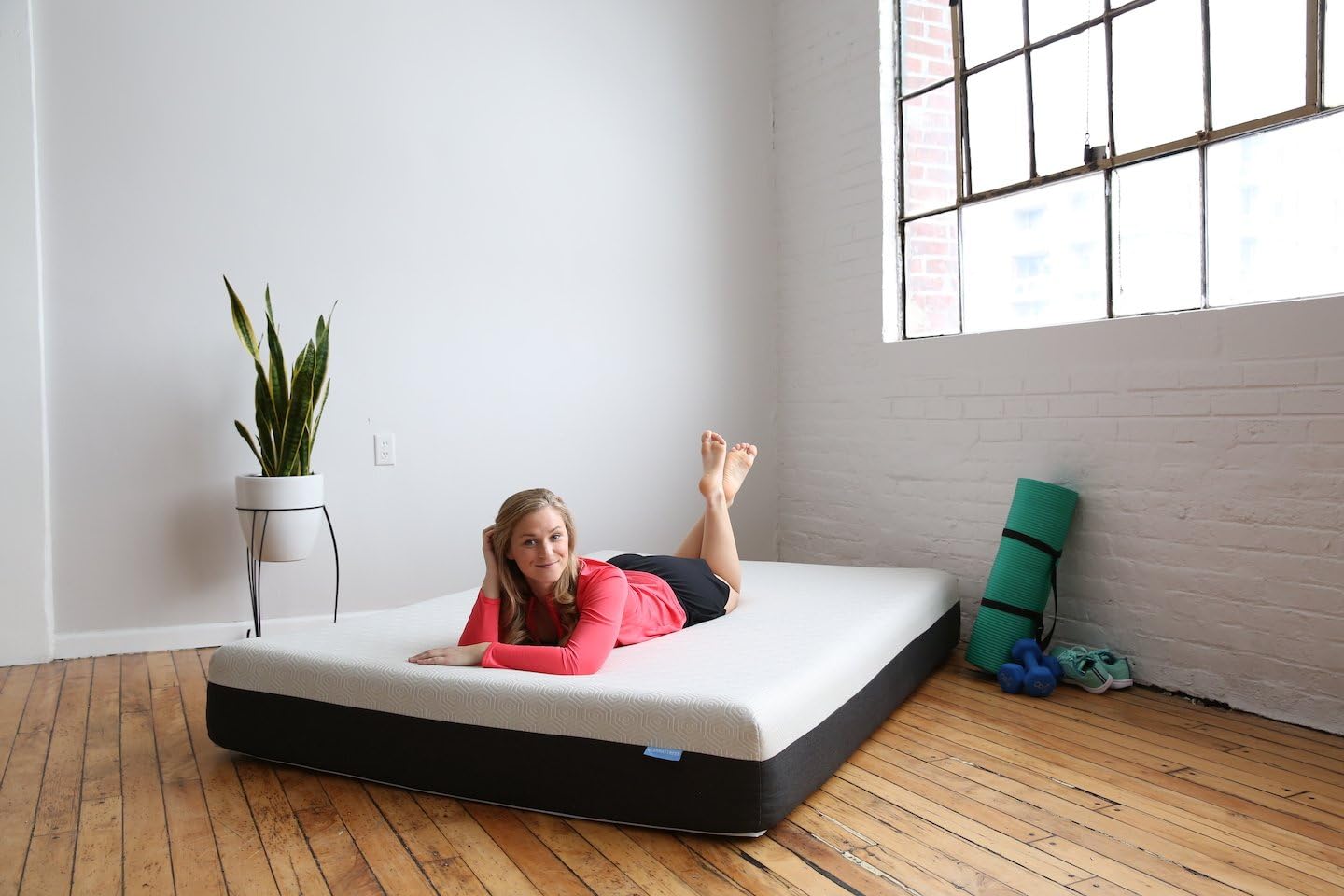 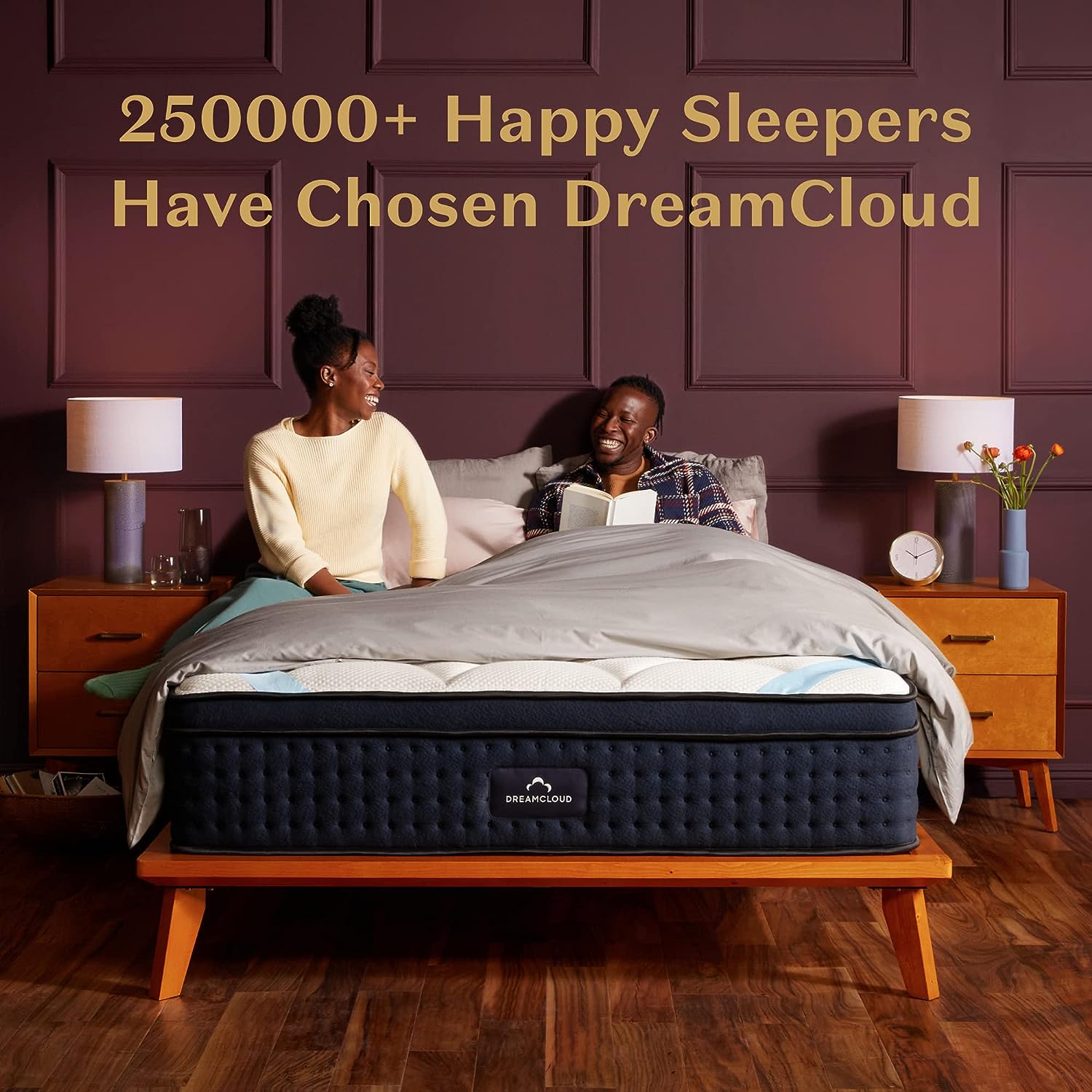 The figures above, nevertheless, refer to MSRP. Both businesses enjoy using discounts and coupons. Depending on the time of year you shop, you can often anticipate receiving a $140–$260 discount on both beds. To see the current specials that both Bear and DreamCloud are now offering, we advise visiting their respective websites.

The Bear Hybrid has a top made of large, plush pillows that has the general feel of an innerspring bed.

It’s also important to note that the secondary layer feels more like neutral foam than memory foam, so you won’t really detect any memory foam-like characteristics as you do with DreamCloud. The bed is very comfortable to move positions on and has a lot of bounce.

We wouldn’t classify the DreamCloud mattress as a true memory foam mattress, despite the fact that it has a substantial layer of gel memory foam close to its surface. That is because the quilted euro top evens out the bed’s feel. The memory foam in the mattress is still detectable, but not as strongly as, say, the Layla mattress. In general, we would describe the bed as having a pillow top feel with some memory foam thrown in.

We would rate Bear as a medium on the soft-to-firm scale, smack in the middle. It can accommodate back, stomach, side, and combo sleepers of various shapes and sizes. Because of this, there isn’t much of a difference between DreamCloud and Bear Hybrid in terms of recommended sleeping positions. In this case, personal preference will ultimately determine the choice.

It is extremely comparable to the Bear Hybrid in terms of stiffness. We estimate that it falls somewhere between a medium- and medium-firm on our scale. A wonderful mix of support, comfort, and pressure relief is provided by the bed.

As a result, we believe that any type of sleeper will be comfortable on the mattress. While back and stomach sleepers still obtain the required support under their lower backs and trunks, side sleepers have pressure reduction for their hips and shoulders.

You may like to read; Bear mattress vs Nectar

Both DreamCloud and bear Both mattresses effectively isolate motion, however Bear’s memory foam has an advantage because to its consistency.

When a mattress absorbs motion rather than allowing it to travel over its surface, motion isolation develops. People who readily wake up when their partner moves during the night may be drawn to a mattress with good motion isolation.

Due to innerspring Bear offers more edge isolation than dream Cloud mattress. Sitting or sleeping close to the edge of the bed may be easier with a strong edge. A sleeper may feel as though they could unintentionally roll off the side of the bed if they get too close due to edge sinkage.

The available mattress surface may be reduced as a result. Similar to this, a weak edge could be more challenging to sit on, making it more challenging to get into or out of bed. Couples who wish to use the entire mattress surface and individuals with mobility impairments who find it difficult to get into or out of bed may require strong edge support more than others. 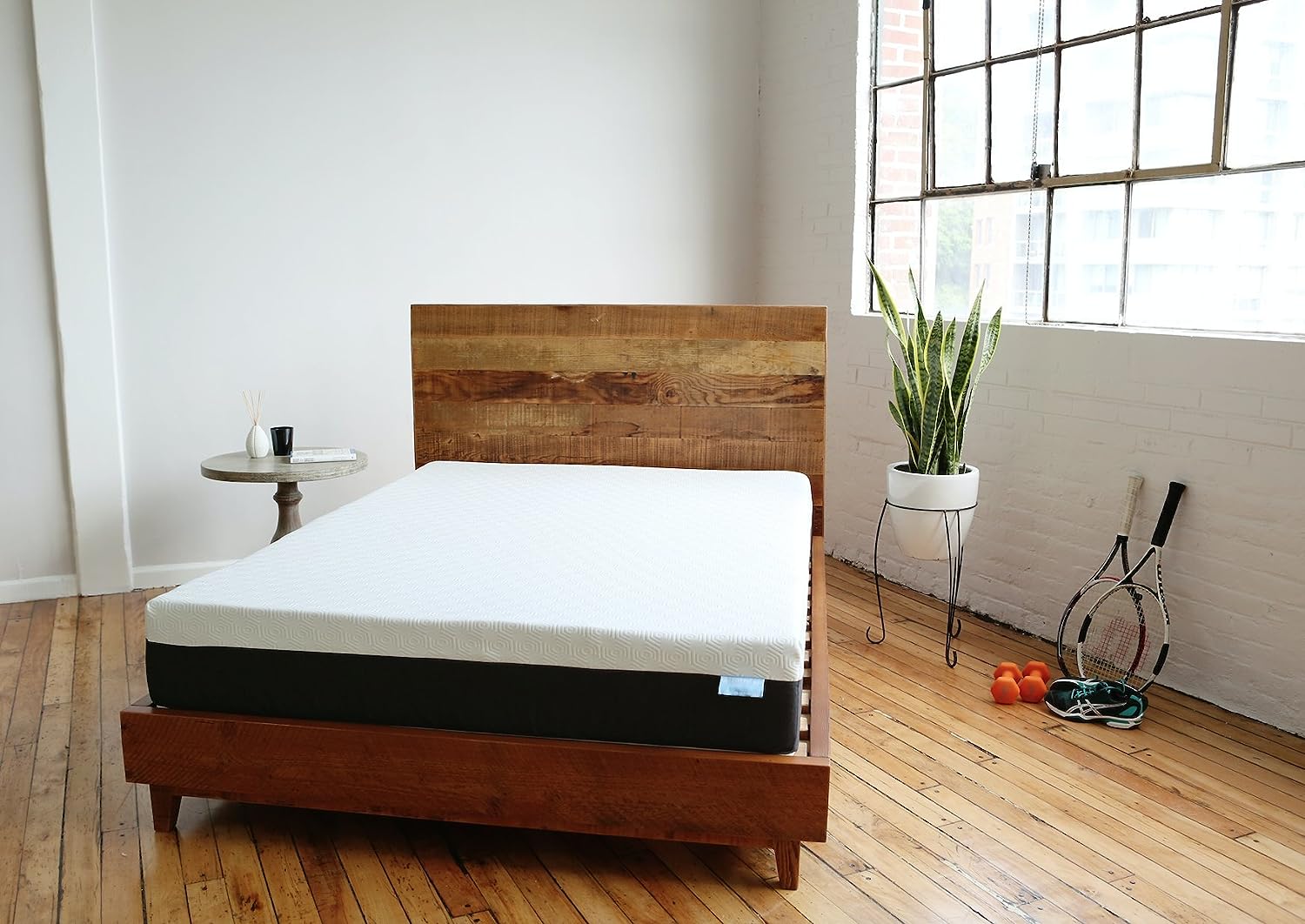 Purchase a bear mattress, if you are:

You’re on a tight budget:  Bear allows you to make a purchase while spending less than DreamCloud.

Side Sleeper:  Bear is a touch softer and will adhere better to your contours as a result.

Admirer memory foam:  Bear has a more memory foam-like feel, so if you’ve had success in the past with that kind of mattress, Bear may be more comfortable for you. 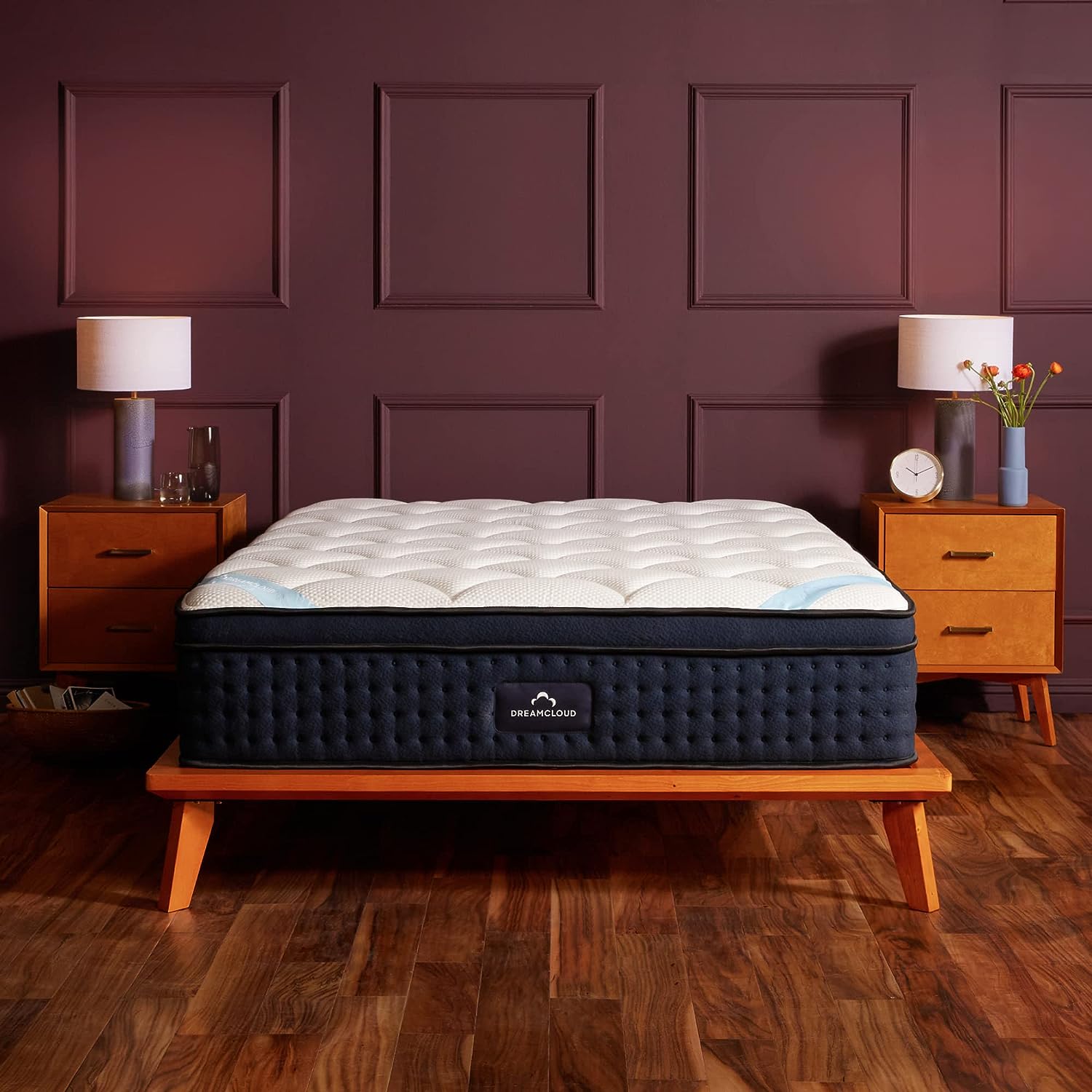 Buy Dream Cloud mattress, if you are a lover of:

Luxurious life: The DreamCloud feels like a luxury mattress overall since it is exceptionally thick and has a hand-tufted pillow top.

Traditional mattress feels: DreamCloud resembles a conventional spring mattress more. DreamCloud might be a nice choice if you’ve had experience with that kind of mattress in the past.

Heavy sleeper: DreamCloud is more substantial and reassuring. This probably makes it more suitable for individuals who are on the heavier side.

There are many bed-in-a-box mattresses available, and the majority of them essentially have the same shipping, refund, and other policies. DreamCloud and Bear are alike. They both provide free shipping as a starting point. DreamCloud arrives in a bag, while Bear Hybrid is compacted and shipped in a box. After that, the steps are essentially the same: take the packaging off, put the bed on its base, and give it a few minutes to fully inflate. Here is a video of Bear Hybrid being unboxed.

In addition to free shipping, almost all online mattresses come with a trial period so that you can try them out before making a purchase. While DreamCloud offers a 365-night trial period, which is only equaled by Nectar, Bear only offers 100 nights.

The important thing is that you get the opportunity to create your own opinion on the bed, regardless of how long the trial period is. Nobody is instructing you what to do in a domineering manner. Furthermore, three months should be more than enough time to decide whether you like the bed or not.

You should consider carefully whether this is the bed throughout this trial period. Additionally, you should sleep on the mattress every night for about two weeks to break it in. This will guarantee that it ages evenly and doesn’t have any soft or firm spots.

You should also give your body time to become used to the bed. There’s a possibility that you won’t fall in love with it immediately because it’s different from what you’ve been sleeping on in the past. Just so you know, all beds gradually soften, so it could be a good idea to start out a little harder and anticipate that the bed will eventually soften to your preferred level.

Give a read to Bear and Leesa mattresses

DreamCloud comes with their “Everlong” guarantee, which is essentially a tier-based warranty with extra coverage for the first 10 years, if you decide to keep it. Instead of replacing your bed after 10 years, they will recover or fix it. The complete DreamCloud warranty is available on their website.

Bear offers a 10 warranty on its products, which is roughly 2 as long as the warranty on the typical online mattress. The Bear warranty is tier-based with a split at year 10, just like Dream Clouds. On Bear’s website, you can read the guarantee in its entirety.

Hopefully, by this point, you are aware of the main distinctions between bare mattress Vs Dreamcloud. But we also know that purchasing a new mattress is a huge thing, and you might still be having trouble making your mind up. In our opinion, there are a few key considerations when choosing between the two beds.

If cost is your main concern, DreamCloud is probably the more cost-effective option.  Try DreamCloud if you’d like a little memory foam in your life. If not, choose the Bear Hybrid’s more conventional pillow top.

The Bear Hybrid mattress’ unique cover is designed to promote health and recuperation. As a result, we believe it to be the superior choice for athletes and active individuals.

Is Dreamcloud mattress a good option for stomach sleepers?

Those with heavy stomachs will find DreamCloud to be overly soft. Their hips will sag into its top foams, knocking their spines out of alignment and gradually causing back pain.

Is a DreamCloud mattress good for hot sleepers?

The support layer’s individually wrapped coils in the mattress also permit air to flow through it, preventing the mattress from becoming a solid mass of heat. The DreamCloud should, in general, be a decent choice for hot sleepers who want to keep cool all night.

Does the bear mattress feature a one-sided or flippable design?

No. Since bear mattresses are one-sided by design, they shouldn’t be turned over. The foam technology has the added benefit of being specifically designed to endure over its lifetime as-is, but you might try turning the bed 180 degrees.

Is a Bear mattress good for combo and side sleepers?

Additionally beneficial for side and combination sleepers is Bear Hybrid. It provides the right amount of pressure relief because it isn’t extremely firm and has the softer, pillow-top feel on top of the coils. While sleeping on your side, pressure alleviation is required to account for the protrusions of your shoulder and hip.

Both of these businesses provide high-quality alternatives, but their mattresses feel different and are priced differently. This Bear mattress vs Dreamcloud comparison is hopefully beneficial and will make the choice a little bit clearer. Any particular queries should be left in the comments.

Customers should read this post several times, evaluate their own needs and preferences, and then decide more wisely.

Sleepwithcomfort is created to help you get the right sleep products. We want to support our readers to choose mattresses, pillows, and other sleep products that will make it easier for you to have a better night’s sleep. We try our best to deliver the most accurate and evidence-based information to you and sincerely hope that our web resource will help you sleep better and live better.

Sleepwithcomfort is reader-supported. When you buy through links on our site, we may earn an affiliate commission. The content on this website is for informational purposes only. Sleepwithcomfort.com does not provide medical advice, diagnosis, or treatment options.

©2022. Sleep with Comfort. All Rights Reserved.